Last part of the Pole-to-Pole Adventure.  Skiing the last degree to the Geographic South Pole ...

Going to the 4 extremes of the Planet for Children's Charities and other adventures ...

Successful expedition to the roof of the World that raised $21,500 for Make-A-Wish Canada ... 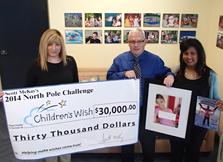 Please support these companies that are helping to promote a positive image for our Automotive Industry ... 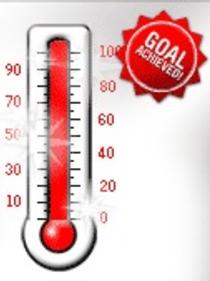 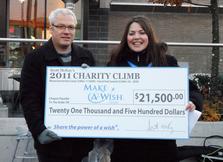 The Children's Wish Foundation of Canada

14th Canadian To Have Ever

North Pole Success...Only The South Pole Remains To Be Done!

My 2011 Charity Climb to Mt. Everest Base Camp and the summit of Island Peak, a 20,305 ft. Himalayan mountain next to Everest was a complete

success.  We raised $21,500. for the Make-A-Wish Canada Foundation.  We helped grant the wishes of many children with life threatening illnesses.

Before my Mt. Everest expedition to the roof of the world, I went to the Middle East to explore the Dead Sea in Jordan/Israel.  It's surface and shores are 377m (1388ft) below sea level, earth's lowest elevation on land.  Having reached the highest and lowest regions, there were only 2 other extreme points on the planet earth...  The North and South Pole.

Thus, the goal of pole to pole was created.  I decided to make the journey to each of the 4 extreme locations by a different mode of transportation.  The Dead Sea was a swim.  Everest BC / Island Peak was mountain climbing.  The North Pole was done by running my first (and only) Marathon.  This will be followed up by cross country skiing 100km (the last degree on the map) to the geographic South Pole in the future.

It is my goal, in fulfilling the personal dream of going to the earths 4 extreme's, to give back in a meaningful and heartfelt way.  It is my purpose to share my fortunate life in ways that create opportunities for others.  I have chosen children's charities to make this happen.  Specifically, organizations that have the mission to grant wishes of children with life threatening medical conditions.  I dedicate my life's pursuits, in following my "Travel Earth Adventure", to that mission in the hope that I can be a part of helping these Canadian children to experience the realization of their own dreams.

I ran the North Pole Marathon to benefit the Children's Wish Foundation of Canada.  Our shared goal of working together to create the magic of a wish  helped inspire me to continue running when the going got tough.  Children's Wish granted over 1000 individual wishes last year.  Since their founding in 1984, they have granted more than 19,000 wishes to Canadian children.  Miracles happen everyday at the Children's Wish Foundation of Canada.  My goal was to raise $28,500 and I am happy to report that the final amount raised was $30,000.  A big thank you to those who helped create the Magic of a Wish.

This was no ordinary marathon.  Before signing the official waiver, questions needed to be answered.  Did I have the nerve and the drive to travel to the North Pole and run on Arctic Ice flows, with 6 - 12 feet separating you from 1200 feet of Arctic Ocean?  Remember, this marathon is not run on land - it's run 'on' water, frozen water, in the high Arctic Ocean.  In the 'assumption of risk' section of the waiver, there was even a part highlighting the fact that the possibility exists for loss of life due to many causes including hypothermia, dehydration or even drowning or Polar Bear attacks!!!

Now, in April 2014, 47 runners competed in this years North Pole Marathon.  The temperature dipped below -30C and the didn't even bother factoring in the windchill!  There were also 4 polar bears spotted near base camp days before we arrived.  This fact forced the event co-ordinator to bring a couple extra spotters with guns from Norway.  When all was said and done 20% failed to reach the finish line but yours truly finished with a time of 12hrs 39min 38secs...  Only the 14th Canadian to have crossed the finish line.  The winner did it in a time of 4 hrs 7 min.  So, I was out there in the polar extremes for another 8 hours!  To put things into perspective, and to show how difficult the race really was, the winner ran the Boston Marathon a week later and finished it in half the time it took him to complete the North Pole Marathon.

The first ever North Pole Marathon was a 'solo' run by Richard Donovan in 2002.  Since then, 12 marathons have taken place involving only 328 people from 40 Countries.  I am the 14th Canadian to have crossed the finish line in the World's Coolest Marathon